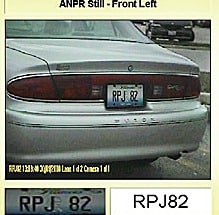 The Ninth Circuit has revived a civil rights lawsuit filed by an innocent driver who was stopped at gunpoint, frisked and detained because an automatic license plate reader misread her car as being stolen.

Blasting the police, the appeals court said, "It is clear that a rational jury could find for Green on all [of her] claims." It continued, "When the police have only a reasonable suspicion to make an investigatory stop, drawing weapons and using handcuffs and other restraints will violate the Fourth Amendment."

Denise Green, a 47-year-old African-American woman with no criminal record, was driving her burgundy Lexus ES on Mission Street in San Francisco at 11:15 p.m. one night, when she passed a police "camera car" with an automatic license-plate reader.

She kept going and may not have noticed that another police car had started following her, and stopped behind her at a red light. Moments later, the police car's lights went off and all hell broke loose.

When Green pulled over, there were up to six police officers surrounding her car with weapons drawn, all of them pointed at Green. A cop ordered her to raise her hands and get out of the car. She complied and that's when she saw that one officer was pointing a shotgun at her. All the policemen were shouting and yelling out conflicting orders.

Sergeant Ja Han Kim ordered her to get onto her knees where he handcuffed her. Green was 5'6" and 250 pounds and had knee problems, making it difficult for her to get down onto the ground.

The police searched her car and patted her down. They found nothing. They ran her plates and confirmed that Green owned the car and that it was not stolen. Twenty minutes passed. Only then did the officers double-check the automatic license plate reader.

No one confirmed the plate number

The police had terrorized an innocent citizen because the automatic reader misidentified her license plate number. The machine had put up a blurry image of a plate for a stolen gray GMC pickup truck. The device read the plate number as 5SOW750, but Green's car had a plate number 5SOW350. At no point did the officers in the camera car or the pursuit vehicle visually confirm the plate number or check the reader's report.

"In this case, they terrorized an innocent suspect. But with guns drawn, the cops put themselves in a position where a less cooperative suspect -- someone who said the wrong thing, or made the wrong move or fit the wrong profile -- may easily have been shot, and it was all completely avoidable," said Shawn Vincent, Communications Director at O'Mara Law Group in Orlando.

Green filed a lawsuit charging the police, the city and the county violated her civil rights with a wrongful detention, false arrest and excessive force. The Fourth Amendment of the U.S. Constitution protects Americans against unreasonable searches and seizures.

A federal trial court threw out her complaint, saying that the police had "qualified immunity," which protects government officials from liability for civil damages. But an outraged Ninth U.S. Circuit Court of Appeals saw otherwise and revived her lawsuit in a recent decision.

The court pointed out numerous goof-ups by the San Francisco officers:

"All of these factors count against a finding that the officers' conduct was a reasonable response to safety concerns," the court said. "A rational jury could find that the tactics were not reasonable given the totality of the circumstances."

No immunity for the officer

The officers had alternatives available. At the very least, they could have held their weapons at a "low ready" position instead of pointing them directly at Green. As for qualified immunity, the court said Sergeant Kim knew that no one had visually confirmed the plate number, so he didn't deserve special immunity.

"Because a rational jury could find that Defendants violated Green's Fourth Amendment rights and that Sergeant Kim is not entitled to qualified immunity at this stage," the appeals court sent the case back for a trial.

We can hope that a jury of Green's peers, who may also have driven down a big city street late one night, will recognize that bungling policemen have no right to terrorize innocent drivers because they were too lazy to check out a reading from a device known to give false reports.

Larry Bodine is a lawyer and journalist who is the publisher of the National Trial Lawyers and the former Editor in Chief of Lawyers.com. Readers can follow @Larrybodine on Twitter and on LinkedIn, where he moderates several legal groups.