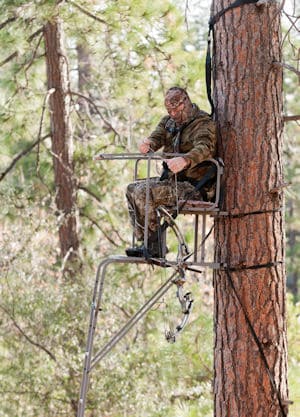 The Sixth Circuit revived a product liability suit filed by a hunter who fell 25 feet after his tree stand straps broke.

Bradley purchased the straps, manufactured by Ameristep, to secure a tree stand he owned. The straps were exposed to the elements for several months before Bradley removed them. In 2011, Bradley reinstalled the stand and straps; he visually inspected the straps and climbed into his stand.

After a few minutes in the stand, the straps broke and Bradley fell 25 feet to the ground breaking both ankles and dislocating his arm. The injuries prevented him from returning to work as a train conductor.

The district court disqualified Charles Powell as an expert witness because he made specific references to his experience in the production of metals versus the polymer material used to make the straps.

Powell would have testified that Ameristep failed to include an inhibitor that would have reduced the degradation of the straps while exposed to the elements. He also believed the defendants failed to warn consumers how to recognize whether the straps were safe for use.

Given Powell’s professional, academic and agency experience the appeals court concluded there was an abuse of discretion to exclude Powell’s testimony.

The appeals court also reversed the product defects claim due the court finding that the expert witness testimony should have been included.

The district court had dismissed the products liability claim because it believed there was no sufficient evidence to support it.

Expert testimony is key in establishing causation in a products liability suit.  Additionally, under Tennessee law the plaintiff is entitled to use the consumer expectation test.  The test allows the “plaintiff to prove the product did not conform to safety standards expected by an ordinary consumer.”

A plaintiff is required to provide evidence of the objective conditions, to allow the jury to interpret whether ordinary safety expectations were met.

The defense disagreed with the plaintiff’s use of the test, stating the ordinary consumer would not understand the chemical composition of the straps and the rate of deterioration.

The court ruled although consumers may not understand the specifics, it was reasonable to believe consumers had enough experience to have some expectation of the lifespan of tie-downs, straps, or webbing even when exposed to various weather conditions.

The court said there was no question that the straps – a simple device – was the proximate cause of Bradley’s injuries.

Tennessee law requires manufacturers to warn consumers of non-obvious dangers caused by its products.  Generally, if the consumer was already aware of the danger, the manufacturer is off the hook because the failure to warn can not be the proximate cause of the injury.

Bradley testified that he was aware that it was better not to expose the straps to the elements for long periods and regularly examined them. However, the plaintiff argued the instructions provided by Ameristep were vague and had multiple interpretations.

The court held that it was not necessary for the plaintiff to describe an adequate alternate warning for the straps but present the question to the jury whether the warnings were adequate for a reasonable consumer.