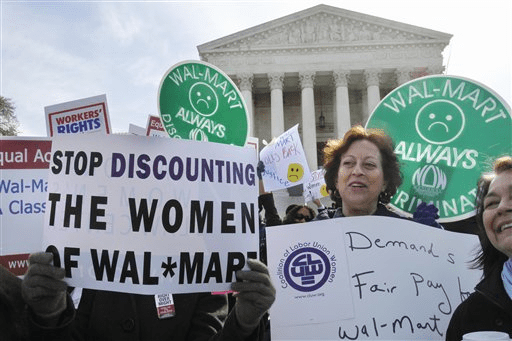 These plaintiffs can effectively raise the stakes for defendant employers by subjecting them to never-ending lawsuits dating back decades.

The Sixth Circuit revived a sex bias would-be class action suit against Wal-Mart, which will allow the three female plaintiffs -- Cheryl Phipps, Bobbi Millner, and Shawn Gibbons -- to continue litigating claims dating back to 1988, when the original lawsuit was filed.

Plaintiff employees of the discount department store chain sought to bring the lawsuit on behalf of thousands of women who worked in Wal-Mart’s Region 43, which is centered in Tennessee and includes parts of Alabama, Arkansas, Georgia, and Mississippi. Wal-Mart, the world’s largest company (in terms of revenue), “strongly disagrees” with the Sixth Circuit’s decision. The corporation giant’s spokesman, Randy Hargrove, said:

“This is an attempt to re-litigate claims based on the same theories that were rejected by the U.S. Supreme Court. Wal-Mart has had a strong policy against discrimination in place for many years and we do not tolerate discrimination. We are considering our options, including seeking review of this decision by the full panel of the Sixth Circuit.”

Hargrove insists the retailer offers “unparalleled advancement opportunities to the more than 800,000 women” working in its stores and clubs nationwide.

The Sixth Circuit disagreed, however, determining the lower court erred in throwing out the sex bias allegations as time-barred. The claims had originally been raised by six female employees in a different case, Dukes v. Wal-Mart Stores, Inc. The six original plaintiffs filed suit under Title VII in the Northern District of California on behalf of all former and current female employees at Wal-Mart stores nationwide. The plaintiffs sought certification of a nationwide class under Federal Rules of Civil Procedure Rule 23(b)(2), and were finally certified in 2004. The Ninth Circuit affirmed in 2007.

The Supreme Court granted certiorari and issued a landmark decision in June, 2011, reversing the nationwide class certification. SCOTUS held the plaintiffs did not demonstrate questions of law or fact common to the class because they failed to provide “significant proof” of a nationwide policy or other “specific employment practice” that affected 1.5 million class members in the same way.

The plaintiffs did not let the Supreme Court stop them, and promptly filed a motion in the California district court to extend tolling of the statute of limitations. Upon granting the motion, the district court directed all class members who had not filed administrative charges with the EEOC to do so prior to May 2012. The plaintiffs then amended their California case to narrow the scope of the proposed class to current and former female employees subjected to gender discrimination in California regions.

Additional plaintiffs, such as the three women from Tennessee before the Sixth Circuit, filed suits in four other jurisdictions: Texas, Florida, Wisconsin and Tennessee. The claims, however, have been the same for the past 15 years: Wal-Mart engages in a systematic pattern of discrimination against its female employees that stunts their pay and advancement opportunities.

In Phipps, the Sixth Circuit case, the court allowed these former class members to re-assert the same class claims that the Supreme Court rejected in Dukes, primarily because the plaintiffs properly invoked a different rule and certification theory [Rule 23(b)(3)] on behalf of a smaller group of class members (Region 43).

The Sixth Circuit’s opinion has major implications, seemingly opening the door for plaintiffs who lose class certification in one forum to file the same claims in other forums, “stack” their tolling period, and “shop” different class certification theories in the hopes of exhausting their opponents or obtaining more favorable rulings.

If these plaintiffs are successful in stacking the statute of limitations tolling periods, it can mean difficulty and prejudice in obtaining facts, witnesses, and overall memory of events for employers. These plaintiffs can effectively raise the stakes for defendant employers by subjecting them to never-ending conglomerations of lawsuits dating back decades.

Ironically, only time will tell whether Wal-Mart will actually seek further review of the Sixth Circuit’s decision as Hargrove foreshadowed in his statement. It is also possible the district court will resolve them matter based on principles of stare decisis and comity.