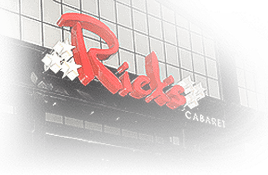 The dancers claimed after paying club fees and required tips to deejays and other club workers, they sometimes ended up not making any money or even going negative.

A federal judge recently ruled that more than 1,900 female dancers at Rick's Cabaret of New York, NY, are entitled to $10.8 million in back wages and tips after the dancers filed an employment law class action suit in 2009. The dancers, who worked at Rick's Cabaret from 2005-2012, claimed they were entitled to be classified as employees rather than independent contractors, entitling them to minimum wage.

Rick's Cabaret, located at 50 West 33rd Street, is one of only two adult entertainment companies to be publicly traded on NASDAQ. Additionally, Rick's Cabaret has been named on a Forbes magazine list as one of the best 200 companies, and the strip club has been profiled in The Wall Street Journal, Fortune, MarketWatch, SmartMoney, The New York Daily News, and USA Today. Rick's Cabaret was founded in 1983, and with locations all over the country, its website notes the late Anna Nicole Smith met her oil billionaire husband while dancing at its Houston location.

Rick's Cabaret has not only failing to pay its dancers, but holds a practice of requiring the dancers:

Rick's Cabaret claims they believed this money was going directly to the dancers, according to the suit.

But that's not all of the extra fees Rick's Cabaret dancers are required to hand over to to work, all while receiving no wages. Dancers also must contribute a $20 from every lap dance or personal dance performed. Another performance fee required of the dancers at Rick's includes a taking of $20 every time the dancer spends time in one the club's semi-private rooms, a purchase which costs $100 for 15minutes, $200 for 30 minutes and $400 for one hour.

The dancers of Rick's Cabaret claimed after paying club fees and required tips to deejays and other club workers, they sometimes ended up not making any money or even going negative. Their attorney has argued, “There is a real mythology of the wealthy stripper who has made piles of money. People see all the money the customers give to the dancers. What they don't see is all the money going back from the entertainer to the club.”

Rick's argued any wages the strip club would be required to pay its dancers should be offset by the tips given to dancers by customers. The 51-page ruling opinion disagreed, stating, “There is no charter under (state labor law) for an employer to treat a performance fee as either a 'wage' or as an offset to its statutory wage obligations.”

Manhattan Federal Court Judge Paul Englemayer took aim at the company's “Dance Dollars” practice, finding, “a reasonable customer would have understood the performance fees which customers paid to dancers as gratuities belonging to the particular dancers, not as service charges belonging to the club.” The club, which charged the customers an additional service fee of $4, left the dancers only collecting approximately $14 out of the $20 customers believed them to be collecting.

After a finding the dancers are owed $10.8 million in damages for minimum wage violations and improperly retaining tips, RCI Hospitality, Rick's Cabaret's parent company, has said it is disappointed with the “flawed” decision. “The concept that the large sums of money earned by entertainers at Rick's Cabaret New York, for which they received IRS Form 1099s, do not offset the claimed wage obligations is a fundamentally flawed concept,” RCI Hospitality Holdings said in a statement. There is currently no requirement for Rick's Cabaret to pay the damages that resulted from Judge Englemayer's decision last month because the case is still ongoing.

RCI Hospitality is also appealing, on behalf of Rick's Cabaret, an earlier ruling by Judge Englemayer that found the dancers to be employees rather than independent contractors. It was after this determination the minimum wage and tip claims could be heard by the judge. In addition to the employee/independent contractor appeal, RCI Hospitality intends to appeal the wage violation decision once the upcoming trial has been heard.

At trial, Judge Englemayer will hear the complaint regarding the $60 per shift fee for the dancers to work, and another ruling in favor of these dancers could result in millions more for these employees. The November ruling covered claims the judge felt could be decided based on court documents alone, but the dancers are seeking over $18 million in damages total.