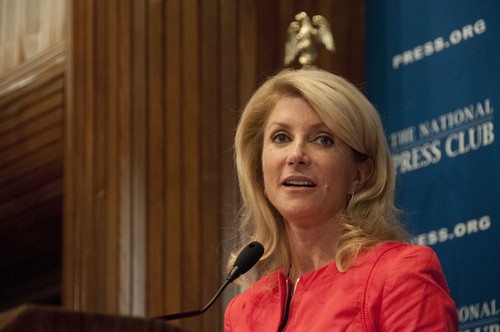 Texas Senator Wendy Davis filed a brief with four other elected officials. She speaks of her two abortions due to a medical complication and a life threatening brain malformation in the fetus.

In an amicus curiae brief to the Supreme Court, 107 women lawyers and six female law students urged the Court to invalidate provisions of the Texas bill at issue in Whole Woman’s Health v. Cole that places restrictions on abortion clinics.

The brief did not rely on constitutional arguments, but instead told the individual stories of law professors, former judges, appellate attorneys, law clerks, and other attorneys who ended pregnancies due to medical complications, unintended pregnancies, abusive relationships and teen pregnancies.

The case is set for argument on March 2, 2016 and will determine whether two restrictions imposed by Texas House Bill 2 create an “undue burden” on a woman’s right to obtain an abortion, a standard from the 1992 case, Planned Parenthood of S.E. Pennsylvania v.  Casey.  The bill requires that a doctor performing abortions have admitting privileges to a hospital within 30 miles of the clinic, and that the clinic must meet the same standards as ambulatory surgical facilities.

The women in the brief wrote, that like the one in three American women who have terminated a pregnancy in their lifetimes, having “meaningful access to reproductive choice” has allowed them the “opportunity to fully participate in the economic and social life of the nation as promised in Casey.”  The intention for the brief, they wrote, is to “inform the Court of the impact” its decisions in Roe and Casey has had “on the lives of women attorneys, and by extension, on this nation,"

Through the personal narratives, the women humanize the issue of reproductive choice and discuss their belief that “they would not have been able to achieve the personal or professional successes they have achieved were it not for their ability to obtain safe and legal abortions.”

One public defender wrote of breaking the three-generation cycle of teenage pregnancy and an emotionally abusive relationship when she had an abortion at 16 years old.  She writes that her access to a safe abortion saved her from the “dreams deferred, the plans derailed, the poverty endured” that she has witnessed of other teen mothers.

A law professor wrote of her ability to continue her graduate studies and leave an abusive partner after a contraceptive failure left her pregnant.  She credits being able to have an abortion with saving her “child from having an abusive father, and allowed [her] to use [her] education for the social good.”

Another discussed her ability to leave an abusive partner after an unplanned pregnancy at 35 years old.  She wrote that the ability to choose the father of her children allowed her to keep a successful career and eventually marry and have two children later in life.

Another law professor wrote that the Court’s decision in Webster requiring a judicial bypass provision to parental consent abortion laws saved her from “self-abortion by clothes hanger…and suicide.”  She wrote that “were it not for [her] ability to have a safe and legal abortion that day” she would have ended up dead or unable to follow the life path of her choosing.

Lawyers in the brief also wrote about their medically necessary abortions due to the likelihood of severe birth defects or a medical danger posed to the mother.  During her sixth month of pregnancy, a partner at a major law firm terminated her pregnancy after discovering her unborn had a very rare heart disease, causing congestive heart failure in utero.  With a less than 10 percent chance of making it term, and less than 1 percent chance of surviving his first year of life, the lawyer and her husband decided it “would be selfish” to continue the pregnancy.

An appellate attorney who has argued in front of the Supreme Court discussed the opportunities she has been able to pursue as an attorney, wife, and mother, which would not have been afforded to her if doctors had not been able to treat her two dangerous pregnancies.

The brief provides a counter to the pro-life stories of women who regret having abortions.  These stories “demonstrate the real world effects of abortion access on the lives and careers of women attorneys” allowing them to participate in what was written in Casey as the “economic and social life of the Nation.”