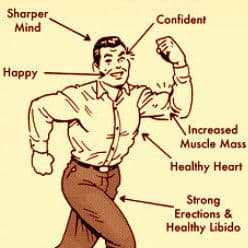 Manufacturers of testosterone therapy drugs put out ubiquitous print, television and internet advertising, asking men to speak with their doctors about “Low T.”

Nearly 5,000 Testosterone lawsuits have been filed against drug manufacturers including AbbVie Inc., Auxilium Pharmaceuticals, and Endo Pharmaceuticals Inc. as part of multidistrict litigation docket 4525 (MDL) in the Northern District of Illinois.

Lawsuits filed by health insurers alleging the pharmaceutical companies caused them to pay for medically unnecessary uses of TRTs are also included in the MDL.

Rapid growth of TRT use and lawsuits

The MDL was established in June 2014 and initially included only eight separate lawsuits.  The rapid growth to thousands of cases coincides with the dramatic rise in use of testosterone.  Prescription sales of TRTs have increased from $18 million in 1988 to $1.6 billion in 2011 as the percentage of men over 40 using TRTs has tripled during the same period.

MassTortNexus.com maintains a detailed database for trial attorneys including motions, orders, forms and filings in the testosterone MDL.

However, studies have linked the use of testosterone drugs to an increased risk of heart attack, stroke, and death.  A 2010 study found that men taking testosterone drugs compared to men taking a placebo were five times as likely to experience severe heart problems such as congestive heart failure.

The rise in sales suggest that TRTs are being marketed and used for off-label purposes by men with no medical need for it including use “extensively in attempts to relieve symptoms in men who have low testosterone for no apparent reason other than aging,” said the FDA.

The TRTs are popular among older men to counter the signs of aging and among younger men seeking physical enhancement.

In response to the research and an FDA investigation conducted in 2014, the FDA directed manufacturers to conduct additional research and required drug makers warn patients that the products may increase the risk for heart attacks and strokes.

The men who filed lawsuits claim that the TRT products were deliberately marketed toward aging men.  The lawsuits also allege that drug makers invented a disease and used fraudulent and aggressive marketing campaigns to sell TRTs for off-label uses yet failed to adequately test the safety of their products despite known, but intentionally unadvertised, cardiovascular risks.

Most of the lawsuits have been brought against AbbVie Inc., makers of Androgel, which is the most heavily marketed and widely used TRT.  Six bellwether trials are scheduled to begin in October 2016 and continue until April 2017.  The second bellwether group for other TRT drugs is not expected to begin until late 2017.

The case is In re: Testosterone Replacement Therapy Products Liability Litigation, case number 1:14-cv-01748, MDL number 2545, in the U.S. District Court for the Northern District of Illinois.