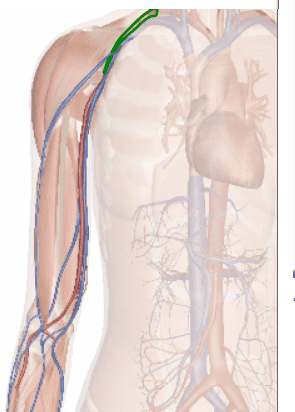 The axillary artery supplies blood vessels under the arm and the chest wall.

A jury in Harris County, TX, held a hospital and surgeon liable for $1.6 million because they failed to notice a torn artery during a shoulder operation that left the patient with a disabled arm and hand.

Plaintiff Jay Houston, 52, a trucking terminal manager, underwent a partial left shoulder replacement at Christus St. John Hospital in Houston in 2009, which was performed by Dr. Marston S. Holt. Houston was discharged but returned to the hospital two days later with signs of inadequate blood flow to his arm. He underwent a bypass procedure to restore blood flow as well as a incisions in the fascia to relieve pressure.

Nurses had informed the anesthesiologist several times that Houston's arm was showing signs of inadequate blood, but no one told Dr. Holt. The doctor himself should have noticed the signs and should have called in a vascular surgeon during the shoulder replacement, according to attorney David W. Hodges of Kennedy Hodges in Houston, TX, a member of The National Trial Lawyers.

Houston sustained muscle and nerve damage to his left arm, leaving him unable to close his fist and limiting the use of his arm.

The jury returned its verdict on October 2, 2013 as follows: