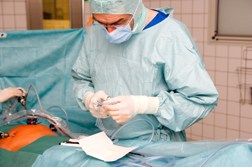 The medical device, which was implanted to treat incontinence, was defectively designed.

The jury hearing a transvaginal mesh lawsuit in a Texas state court has ordered Johnson & Johnson and its Ethicon, Inc. unit to pay $1.2 million in compensatory damages to a woman who suffered pain and mesh erosion from a TVT-O mesh sling.

According to court documents, the jury returned the verdict on April 3, after finding that the device, which was implanted to treat incontinence, was defectively designed. However, the jury declined to award punitive damages after finding that Ethicon had not failed to provide adequate warnings about the risks associated with the TVT-O sling.

[sws_yellow_box box_size="300"_align="right"]See out latest report $830M Settlement Announced in 20,000 Transvaginal Mesh Cases [/sws_yellow_box] "Our firm is representing hundreds of women in claims against Ethicon and other companies who allegedly suffered vaginal mesh complications like those cited in this lawsuit. We are encouraged by this verdict," says Felecia L. Stern, an attorney with Bernstein Liebhard LLP, a New York law firm representing victims of defective drugs and medical devices.

Court documents indicate that Johnson & Johnson and Ethicon have been named in more than 12,000 product liability claims that have been filed on behalf of women who were allegedly injured by pelvic mesh products used to treat pelvic organ prolapse and stress urinary incontinence.

The majority of these claims are pending in a federal multidistrict litigation now underway in U.S. District Court, Southern District of West Virginia. Bernstein Liebhard LLP partner, Jeffrey S. Grand, is serving on the Plaintiffs' Steering Committee in that proceeding. (In re: Ethicon, Inc., Pelvic Repair Systems Products Liability Litigation - MDL No. 2327)

According to court records, Ethicon and Johnson & Johnson are also facing nearly 4,700 transvaginal mesh lawsuits that have been filed in a consolidated proceeding underway in New Jersey's Atlantic County Superior Court, where the first trial ended in March 2013 with an award of $11 million in compensatory and punitive damages to the Plaintiff. Grand is serving as Co-Liaison Counsel in this proceeding, and was also a member of that trial team. (In re: Pelvic Mesh/Gynecare Litigation, No. 6341-10)

Grand is also serving on the Plaintiffs' Steering Committees for three other federal vaginal mesh proceedings, including: American Medical Systems, Inc. (MDL No. 2325); Boston Scientific Corp., (MDL No. 2326); and C.R. Bard, Inc., (MDL No. 2187). He was also named Co-Liaison Counsel in a second litigation underway in Atlantic County Superior Court for lawsuits involving C.R. Bard products. (In re: Pelvic Mesh Litigation/Bard, No. L-6339-10)