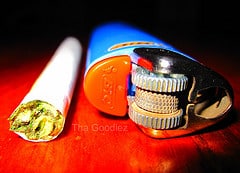 Twenty-three states and the District of Columbia have legalized medical marijuana, and of course recreational use of marijuana is legal in Washington and Colorado.

America's most influential newspaper, The New York Times, called for the legalization of marijuana in an editorial published on July 27.

"The federal government should repeal the ban on marijuana," says the Times. "We reached that conclusion after a great deal of discussion among the members of The Times’s Editorial Board, inspired by a rapidly growing movement among the states to reform marijuana laws."

According to NORML, "Marijuana is the third most popular recreational drug in America (behind only alcohol and tobacco), and has been used by nearly 100 million Americans. According to government surveys, some 25 million Americans have smoked marijuana in the past year, and more than 14 million do so regularly despite harsh laws against its use."

Twenty-three states and the District of Columbia have legalized medical marijuana, and of course recreational use of marijuana is legal in Washington and Colorado. Despite the trend in favor of legalizing marijuana, under federal law it is a Schedule 1 drug, the most dangerous class of drugs including heroin, LSD, ecstasy, methaqualone and peyote.

Not a health risk

Medical Marijuana: When is it Coming to Your State?

The Case for Marijuana

"Moderate use of marijuana does not appear to pose a risk for otherwise healthy adults. Claims that marijuana is a gateway to more dangerous drugs are as fanciful as the “Reefer Madness” images of murder, rape and suicide," says The Times.

Several states with legal medical marijuana received letters from their respective United States Attorney's offices  explaining that marijuana is a Schedule I substance and that the federal government considers growing, distribution, or possession of marijuana to be a federal crime regardless of the state laws. An August 29, 2013  Department of Justice memo clarified the government's prosecutorial priorities and stated that the federal government would rely on state and local law enforcement to "address marijuana activity through enforcement of their own narcotics laws."

"The social costs of the marijuana laws are vast. There were 658,000 arrests for marijuana possession in 2012, according to F.B.I. figures, compared with 256,000 for cocaine, heroin and their derivatives. Even worse, the result is racist, falling disproportionately on young black men, ruining their lives and creating new generations of career criminals," says The Times.