Thomas Girardi selected as Lawyer of the Decade 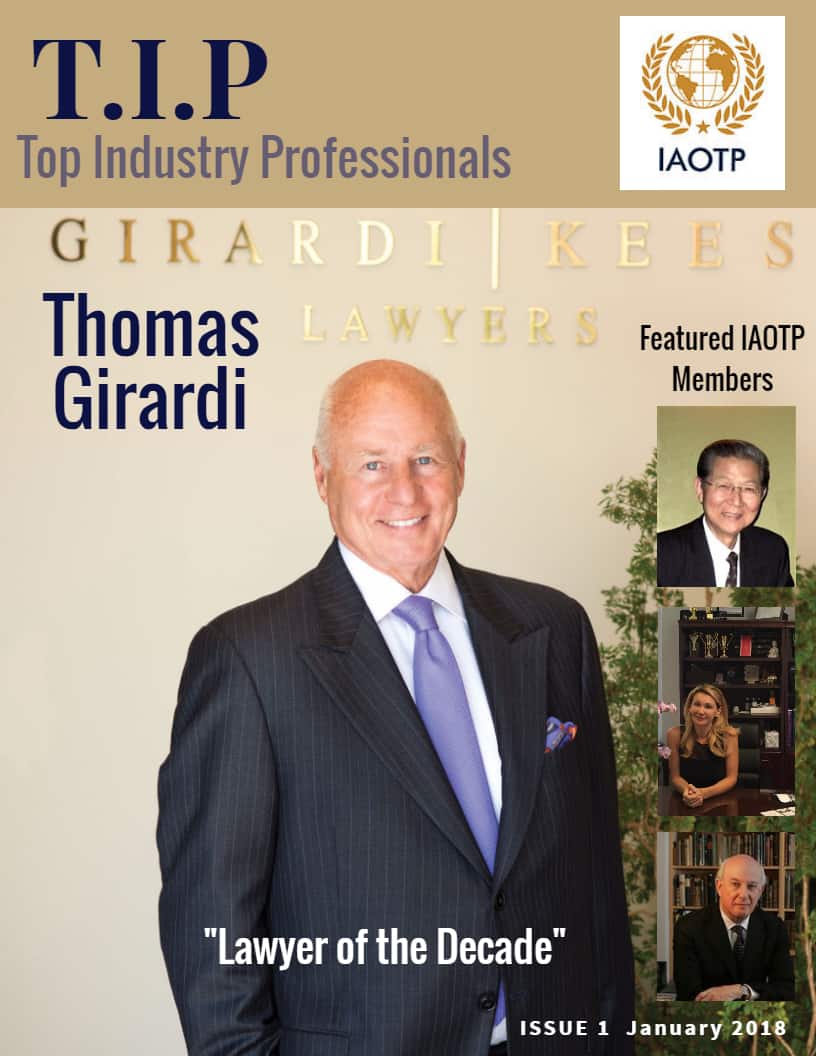 The International Association of Top Professionals (IAOTP) named Thomas Vincent Girardi, attorney and founding partner of Girardi & Keese, as the “Lawyer of the Decade” for 2018 for his outstanding leadership, dedication and commitment to the legal profession.

Girardi will receive the Crystal Tower at the 2017 IAOTP’s Annual Award Gala being held at the Ritz Carlton in Battery Park, New York City.

Mr. Girardi is being recognized as “Lawyer of the Decade” for his 50 years of service as a practicing attorney, his endless list of professional accomplishments, academic achievements, leadership abilities, his dynamic and charismatic personality and his contribution to society.

Stephanie Cirami, President of IAOTP, says that “choosing Mr. Girardi for this award was an easy decision for our panel to make.  He is hands down one of the best trial lawyers of all time and he continues to wow us and the public every step of the way with his career achievements.  There is no one in the world like Tom.  His continued support and generosity have a significant impact on people’s lives and he leaves his mark on whomever or whatever he is involved with.  He is an extraordinary human being and a one of a kind successful, brilliant, gracious, charming man who couldn’t be more deserving of this award. We cannot thank him enough for what he has done for the organization and we are so honored to have him with us.  We cannot wait to spend time with him during his New York stay for the Award Gala.”

Thomas Vincent Girardi has certainly proved himself as an accomplished professional and expert litigator who has become a household name.  From being the trial lawyer on the famous Erin Brockovich case to his solid victories against Merck and the Los Angeles Dodgers, Mr. Girardi is regarded by his peers as one of the nation’s top trial lawyers of all time.

Mr. Girardi attended Loyola Law School and graduated in 1964.  He then enrolled in a master’s program at NYU receiving his LLM in 1965. In addition to running the firm, he has also been an Associate Professor at Loyola Law School from 1976 to the present and was recipient of the “Distinguished Alumnus Award in 1997 and in 2005 named “Champion of Justice” from the law school.

Throughout his illustrious career, Thomas Vincent Girardi has been active in his community, received numerous awards, accolades and recognized worldwide for his outstanding leadership and commitment to the legal profession.  He has been featured in many publications and magazines and will be featured on the front cover of the First International Edition of TIP (Top Industry Professionals) Magazine which will be out January of 2018 and distributed to the prestigious professionals all around the world. In 2003, he received the prestigious honor of being inducted into the Trial Lawyer Hall of Fame by the California State Bar.

He has been featured in Lawdragon Magazine, Los Angeles Daily Journal, The National Law Journal, ICE Magazine, Texas Bar Journal, California Law Business, and New Times Los Angeles, just to name a few. Mr. Girardi is a Member of the Board of Directors and former President of the prestigious International Academy of Trial Lawyers, an invitation-only worldwide organization, limited to 500 trial lawyers.  He is President of the Litigation Counsel of America, member of the Inner Circle of Advocates, American Board of Professional Liability Lawyers, Consumer Attorneys of California, and the International Society of Barristers.

He has an AV preeminent rating with Martindale Hubble and has been selected as “Top Attorney of the Year,” “Top Attorney of the Month,” “SuperLawyers”, “Best Lawyers in America,” “Top 100 Lawyers in California,” “Trial Lawyer of the Year” with many organizations for multiple years in a row.  For 2017 he was named Man of the Year and was also presented the “Citizen of the Year Award” by the International Association of Top Professionals where he was featured on the Thomas Reuters Building in Times Square numerous times throughout the year.

The International Association of Top Professionals are working on a film documentary on Mr. Girardi and have started filming and hope to have the documentary completed and released by this December.