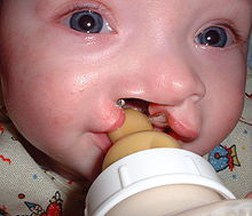 Brayden Gurley was born with a cleft lip on right side of his mouth.

A Pennsylvania appeals court affirmed a $10.9 million jury verdict against Johnson & Johnson's Janssen Pharmaceutical unit in the case of a child born with birth defects including a cleft lip and gum defects.

The case was brought by Haley Powell, along with her husband, Michael Gurley, and on behalf of their son, Brayden Gurley, after the child was born in 2008. The family alleged the anti-seizing drug, Topamax, which Powell took while she was pregnant with Brayden, caused Brayden's birth defects.

Justices Lazarus, Mundy and Platt presided over the three-issue appeal brought by Janssen Pharmaceutical and unanimously affirmed the failure-to-warn jury-verdict in favor of Powell's family on March 16, 2015.

Powell, a South Carolina resident, experienced an epileptic episode in April 2005, at age 18, which resulted in lost consciousness. She was diagnosed with juvenile myoclonic seizures in May 2005 by her neurologist, Dr. Bret Warner. To control her headaches and seizures in 2006, the doctor prescribed Powell Topamax, which Powell continued taking until December 1, 2007.

Neither Dr. Warner nor Powell were aware Topamax causes birth defects such as cleft lip, cleft palate or oral palate.

At the time, Topamax was categorized by the FDA as a “Pregnancy Category C” drug. The FDA has established five categories to indicate the potential of a drug to cause birth defects if used during pregnancy.

According to Lawyers and Settlements,

"Topamax, known generically as topiramate, is approved by the FDA to treat certain types of seizures and to prevent migraine headaches. Based on new research, the FDA suggests that health care professionals strongly weigh the benefits and risks of topiramate when prescribing it to women who are of childbearing age, and Topamax will now be classified as a Pregnancy Category D drug. Part of the problem is that oral clefts occur when parts of the lip or palate do not completely fuse in the first trimester of pregnancy—before some women even know they are pregnant."

What the ultrasound showed

Powell learned she was pregnant on November 19, 2007. When Powell told Dr. Warner about it, he advised her to taper off Topamax slowly. Powell began to reduce her intake of the anti-seizing drug and completely stopped all dosages by December 1, 2007, more than one year after she began taking the drug.

When her pregnancy was in its 27th week, she learned through an ultrasound that her son had a cleft lip on right side of his mouth, and the ultrasound was confirmed when the boy was born. Powell and her husband provided Brayden with corrective-surgery on October 1, 2008, but at trial, Brayden still had a red scar running from under his nose to his lip as a result of the surgery.

Treatments that Brayden will need in the future may include graft surgery to repair the notch in his gums, evaluations to test his hearing, psychological evaluations, dental care related to dental abnormalities, and rhinoplasty for his nasal deformity.

Brayden's parents brought a negligence claim against Johnson & Johnson's Janssen Pharamceuticals using a products liability theory. Partial summary judgment was awarded to Janssen with respect to the family's other claims of strict liability design defect, negligent design, express warranty, punitive damages, and gross negligence claims. The trial court denied the remainder of the motion, and the failure to warn claim proceeded to a jury trial on October 29, 2013.

At trial, Powell and her family asserted that Janssen had actual knowledge that Topamax could cause birth defects in humans from 2000, and certainly by 2006, and that it negligently chose to hide that safety information from prescribing healthcare providers. On November 19, 2013, the jury returned a verdict in favor of the parents totaling $10,955,000 to $10,620,000 for non-economic loss, and $335,000 for future health care costs.

Noneconomic loss is composed of (1) pain and suffering, (2) embarrassment and humiliation, (3) loss of ability to enjoy the pleasures of life, and (4) disfigurement.

After the trial concluded on January 28, 2014, the court issued an order relevant and applicable to all Topamax cases. The order clarified that, while plaintiffs could not offer argument or evidence that Janssen could have unilaterally changed Topamax’s Pregnancy Category, they were permitted to introduce argumentsor evidence that Janssen could have sought or requested a change in the drug’s Pregnancy Category from the FDA.

Janssen claimed on appeal that the trial court erred in permitting Powell's negligent failure-to-warn claim to go to the jury because the family could not prove the use of Topamax proximately caused Brayden’s cleft lip. The most interesting argument made by Janssen was that because Powell ingested Topamax using her mother’s prescription instead of her own in the months before her pregnancy, she severed the link between the learned intermediary (Powell's prescribing physician, Dr. Warner) and herself as the patient.

The court disagreed with that argument, finding a reasonable likelihood that an adequate warning by Janssen would have prevented Powell from receiving the drug. Dr. Warner testified that he was unaware of Topamax’s increased risk of cleft lip or palate in newborns when he prescribed the drug to Powell, and that knowledge of this risk would have deterred him from prescribing the medication for her.

The court determined that the fact Powell had obtained the Topamax for a few months using her mother’s prescription instead of her own because of the family’s financial difficulties did not permit Janssen to evade liability for Brayden’s suffering.

Janssen also argued for remittitur of the $10.9 million jury award, claiming Brayden's injuries did not merit such a large amount. The court made it clear that large verdicts are not necessarily excessive verdicts, giving deference to the trier of fact: “Each case is unique and dependent on its own special circumstances and a court should apply only those factors which it finds to be relevant in determining whether or not the verdict is excessive. Courts may consider[:]

In addition to Dr. Warner's testimony, the jury also heard testimony from Braydon Gurley’s stay-at-home mother, Powell, who is responsible for his care. Powell testified how the surgery for Braydon's severe cleft lip has negatively affected his self-esteem, confidence and his ability to have a simple conversation with others. According to Powell, Brayden becomes extremely frustrated when people do not understand him and suffers from embarrassment due to the residual scar from his cleft lip surgery.

Additional testimony from physicians as to Braydon Gurley’s injuries discussed the kind of extensive care Brayden will need going forward: ongoing visits with a plastic surgeon, dental surgery, speech therapy, auditory evaluations, oral surgery, possible rhinoplasty and treatment for possible psychological issues related to these various corrective surgeries. The court determined the jury award can hardly be said to be excessive when the injuries Brayden has suffered due to his mother's ingestion of Topamax will plague him into adulthood:

"This verdict does not shock this court’s sense of justice nor does it demonstrate the jury was influenced by partiality, prejudice, mistake or corruption. Rather, this verdict shows the jury made an informed and educated finding based on the facts and evidence presented at trial. Brayden Gurley’s pain, suffering and loss were significant and demonstrated on the record throughout the trial . . . The jury decided on a just and fair award to compensate Brayden Gurley for his injuries.”

Brayden Gurley's family is not alone in the legal battle against Johnson & Johnson's pharmaceutical giant, Janssen Pharmaceuticals. A jury trial in Philadelphia recently delivered another blow to Topamax in ordering Janssen to pay $3 million to Kelly and Brian Anderson, along with their child, who was born five years ago with a bilateral cleft palate and lip. Meanwhile, in Virginia, a jury found for April Czimmer, who took Topamax to alleviate migraine headaches for seven months beginning in August, 2006. Her son, Blake Czimmer, was born in September, 2007, with Topamax birth defects requiring four surgeries since birth to correct.

It is quite clear that Topamax litigation and the damages found are only just beginning.

The two leading Topamax cases are as follows:

In re Topamax Litigation, 110602131, Court of Common Pleas, Philadelphia County.