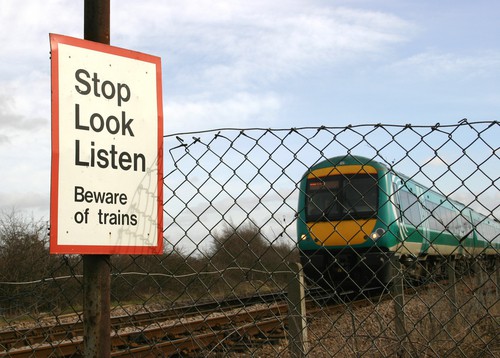 The Virginia Supreme Court affirmed a $2.5 million wrongful death verdict for a driver killed by a train he could not see because a lumber company blocked his view with a tall stack of lumber.

The driver was unable to see past the stacked lumber, and was struck and killed by the three-engine train going approximately 45 miles per hour.

In October 2004, truck driver Charles Settle, was making his seventh trip for the day across the private road and railroad crossing owned by Norfolk Southern Railroad in Haymarket, VA. It was controlled only with “cross buck signs,” according to court documents.

Norfolk also owned the right-of-way, extending 30 feet in each direction of the railroad track, which allowed for the “locomotive train crews and the public to safely proceed across the tracks” by “maintaining clear sight” for safety purposes, according to the testimony of a Norfolk representative.

The RGR, LLC lumber company operated a business of offloading lumber from train cars to tractor-trailers, adjacent to the Norfolk railroad track. At the time of the accident, their lumber was stacked seven feet high within the 30 foot right-of-way, “needlessly cutting down the visibility of a motorist,” according court testimony of the RGR owner.

The Virginia Supreme court affirmed that because of RGR’s negligence: Settles was unable to see past the stacked lumber, and crossed into the railroad track where he was struck and killed by the three-engine train going approximately 45 miles per hour, pulling more than 100 cars, according to the court ruling.

Settles widow reached a $500,000 settlement with Norfolk.  In their appeal, RGR argued that Settles widow failed to establish they had a duty of care, and denied they had a duty of care to take reasonable steps to make the railroad crossing safe as they did not own the property.  RGR also alleged that Settle shared in contributory negligence for failing to look and listen for the train, according to the court decision.

RGR argued that because Settle was on a private road and on the railroad crossing owned by Norfolk, they owed no duty to Settles because Virginia does not recognize a duty of reasonable care on obstructions on private property nor one to protect “mere sight lines,” according to the ruling.

The court ruled that RGR owed a legal duty of care to Settles and others, regardless of property ownership. It said the duty arises if an injury “could have been reasonably foreseen by the exercise of reasonable care,” thereby prompting a reasonable person to “avoid conduct that creates risks of harms to others."

Other drivers who also crossed the track several times that day testified that they could not see the tracks behind the lumber stacks when they approached the tracks.

RGR alleged that Settles was contributorily negligent for “failing to look and listen for the train,” according to the court documents.  Evidence and testimony discussed in the court’s ruling showed that Settles could not have seen or heard the train.

Other drivers and an RGR employee also testified that they only heard the horn once, while others testified they never heard the train horn.  A truck operation expert witness testified that it was likely difficult for Settles to hear noise outside his truck cab.

The court affirmed the jury’s determination that Settles did not share in contributory negligence as he “had the duty to look and listen with reasonable care,” not the “absolute duty to discover the presence of the train.”

Settles, who was delivering gravel to a pipeline construction site, was familiar with the road and railroad crossing.  According to court documents, another driver testified that trucks would typically slow down and check for trains, and proceed without stopping if a train is not present.  The court also stated it could be inferred from Settles' familiarity with the track, that he was aware that trains usually traveled in the opposite direction of the train that hit him.

Driver action was not the proximate cause of collision

The court also determined that Settles likely knew that the lumber stack blocked his view, which would force him to rely on his hearing to cross the track, but because the train horn was not sounded, Settles could not have taken any other actions to avoid the collision, refuting the claim by RGR that Settles actions were the proximate cause of the collision.

The jury and Virginia Supreme court affirmed that Settles was not negligent in his death, and that RGR’s lumber stacks obstructed Settles' view, which was the proximate cause of him crossing the path of the train, causing his death.  The Jury and court affirmed Settle’s widow an award of $2.5 million against RGR, deducting the $500,000 already settled with Norfolk.