Trial Watchers Use Twitter to Save the Open Courtroom 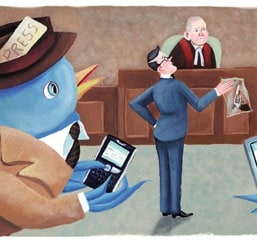 Criminal trials are matters of public interest.  Often the issues at stake in the heart of the trial, say a DUI, may have little to contribute to the public good. However, the mere openness of the trial -- the fact that members of the public (and the press) can sit in the gallery -- provides transparency to our justice system.  It helps preserve every citizen’s right to a fair trial.

Anyone who has tried a case under the media spotlight knows that the presence of a camera changes things.  Judges and jurors, witnesses and counselors behave differently when the camera is on.  It’s a natural response, and it’s undeniable.  But does it affect the defendant’s right to a fair trial?

Perhaps.  I’ve spoken to a number of attorneys who have tried high-profile cases, and they have told me that a camera in the courtroom makes it harder to pick a jury. During presentation of evidence, some witnesses become more reserved and others are emboldened by the camera.  There is a sense that judges -- many of them elected -- may behave differently under the watchful eye of the voting public.

The decision also, wisely, concedes that electronic media is constantly in flux, and it left the door wide open for future courts to deal with “evolving technology.”  Well, the future is now. While our justice system is a patchwork of jurisdictions that either ban, allow, or sometimes allow cameras, there is a new quandary: whether or not to allow Tweeting by observers in courtrooms.

Tweeting is, by far, less invasive than video.  While the participants in court are aware of cameras that record their every move -- their every word -- Twitter is almost invisible.  The only tell-tale sign of tweeting in a courtroom is the sight of a journalist fixated on the phone in his or her lap. The behavior of judges and juries, witnesses and counsel are far less affected by tweets than by cameras.

Moreover, tweets are more democratic than video broadcasts.  The average consumer of news has neither the time nor interest to sift through hours of court footage (even if they had access to it), and instead, courtroom video is compiled and curated by editors and producers, and only a few moments are ever broadcast.  While the camera has the promise of providing broad public access to court proceedings, the truth is that access to the video feed is tightly guarded by the press, and usually only a few select moments ever trickle down to the public.

Twitter, on the other hand, provides the modern tial watcher with a direct feed to the reporters seated in the courtroom.  As individual correspondents send out tweets, they provide a real-time account of what they perceive as important moments in a trial.  A savvy consumer of news can aggregate the feeds of multiple reporters, and the result can be a surprisingly detailed and well-rounded account of what went on in court.

During the Michael Dunn case in Jacksonville, known to many as the “Loud Music Trial,” reporters were disappointed to find that they had been shut out of the jury selection process.  Instead, they gathered in a media overflow room and listened to an audio feed of the proceedings. The feed itself was not broadcast, and but for the tweets of huddled reporters, the critical jury selection in this high-profile case would have gone on in darkness.  Twitter saved the open courtroom in the Dunn trial.

It reminded me of a scene from Steven Spielberg’s film Lincoln where votes for the passing of the Thirteenth Amendment to the Constitution are being called out, and messengers sprint out of the chamber to the Capitol steps where code tappers sit by telegraphs ready to send the news -- vote by vote -- out to the great wide world.  We’re then shown General Grant on a river boat, hundreds of miles away, puffing a cigar and listening with satisfaction as the telegraph messages pour in, and the vote count inches closer to passage.

Telegraph of the 21st Century

Twitter is the telegraph of the 21st century.  Right now, as a civil war rages in Syria, we would know very little about what was happening there without the reports of bystanders tapping out Twitter messages 140 characters at a time.  Twitter is the form of mass communication that survives when all other means fail.

Back here in America, for observers in our courtrooms, Twitter is also the form of communication that survives when all other means fail.  Twitter is far less invasive than cameras, and it does a better job at giving an interested public access to legal proceedings.  While the debate over cameras in court wages on, case by case -- the debate over Twitter should be over.  As far as electronic media goes, Twitter is the baseline. If we value open courtrooms, and we do, then allowing reporters to tweet should be standard operating procedure.

Unless, that is, we want to go back to the telegraph.

Shawn Vincent is the Communications Director at O'Mara Law Group in Orlando, Florida. He is a writer, a technology advocate and a media liaison. He has an ongoing interest in the relationship between message and medium.