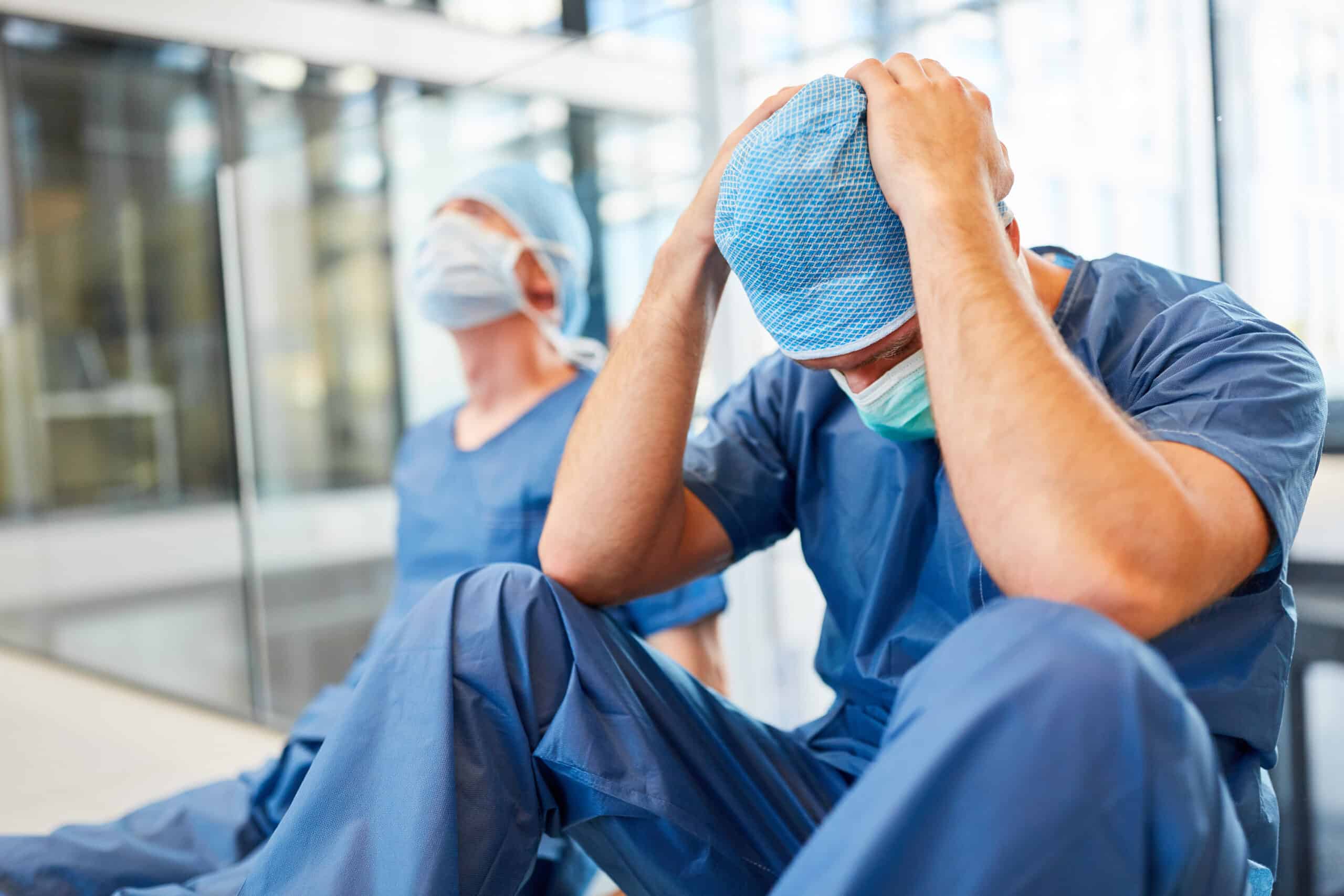 According to Hopkins Medicine, medical mistakes kill approximately 250,000 people each year. In fact, medical malpractice is the third leading cause of death in the United States, directly following cancer and heart disease.

Medical malpractice is defined as any act or omission by a doctor during the treatment of a client that differs from accepted norms of practice (also known as negligence) in the medical community and causes an injury to the client. The negligence could be a result of an error during medical diagnosis, treatment, and/or aftercare. Medical malpractice is a specific type of tort law that handles professional negligence and is a common type of personal injury lawsuit.

In order to prove that medical malpractice took place, you need to be able to show the following things:

Sometimes people are merely unhappy with their treatment or results; however, that does not mean a physician is responsible for medical malpractice. The acting physician should have been negligent in relation to your diagnosis or treatment. In order to sue for medical malpractice, you must prove that the doctor caused you harm in a manner that a competent doctor would have under the very same circumstances. A physician’s care does not have to be the best possible, but it does have to be “reasonably skillful and careful.” Whether a doctor was reasonably skillful and careful is generally at the core of a medical malpractice suit. Almost every U.S. state requires that the client provide a medical expert to speak on the appropriate medical standard of care and reveal precisely how the medical professional differed from that standard.

The Doctor's Negligence Caused the Injury

A common concern is whether or not what the physician did, negligent or not, directly caused the injury. This is because many malpractice cases involve victims that were sick or injured before a medical professional’s care. For instance, if a patient passes away after treatment for lung cancer, and the doctor acted negligently, it may be tough to prove that the doctor’s negligence was the cause of death instead of cancer itself. A patient must prove that it is “more likely than not” that the doctor’s incompetence was the cause of the injury. It is typically required of a patient to have a medical expert testify that the doctor’s negligence caused the injury.

The Injury Led to Specific Damages

Even when it is clear that the doctor performed below the expected standard of care, you are not able to sue for malpractice if you did not suffer any injuries. Below are some examples of the types of harm a patient can sue for:

Of all of the thousands of medical errors that are made in a given year, the most common preventable types of medical mistakes include:

In the United States, medical malpractice law has traditionally been classified under the authority of the individual states (not the federal government) compared to many other countries. In order to win any monetary compensation for an injury related to medical negligence, one must have the ability to show that the subpar medical care was the reason they were injured.

The claim of medical negligence must be filed within a specific amount of time, known as the “statute of limitations.” This time frame differs from state to state. Medical malpractice statutes of limitations can be complicated because they often consist of more than one deadline.

The third part of the statute of limitations is the deadline for minors or their parents or guardians to file a medical malpractice claim. In Alabama, there is an appointed deadline only for minor children under the age of four at the time of the misconduct. If a victim of malpractice is under the age of four, the child has until their eighth birthday to file a claim.

The Statute of Repose

As soon as a client proves that the neglect led to their injuries, the court will calculate the monetary damages that will be paid in compensation. The damages that will be taken into account are both economic and non-economic. Economic damages are lost income, medical costs, and the cost of future treatment, and non-economic damages are typically pain and suffering. Doctors who practice in the United States normally carry medical malpractice insurance coverage to protect themselves in the event that medical negligence or accidental injury occurs. In many cases, this kind of insurance is required as a condition of hospital privileges or employment with a medical group.

How to File a Claim

As stated above, the measure of whether or not a doctor acted negligently, or failed to provide adequate care, depends on whether the patient would have gotten the very same treatment of care from another doctor under the same circumstances. The majority of doctors intend to operate at the highest standard of care for every client they see; however, there are times when things can go seriously wrong.

If you or a loved one has experienced less than adequate medical care that has ended in damage or injury, you more than likely will be entitled to medical malpractice recovery.

Consult a Medical Malpractice Attorney As Soon As Possible

Although particular injuries can be dealt with without professional assistance, a medical malpractice claim is not one of them.

Second, and depending on where your case is going to be filed, compliance with pre-lawsuit requirements such as medical expert testimonies, review boards, and notices of intent to file a claim will decide whether your case will be allowed to start. An attorney that routinely handles medical malpractice cases will have the experience, resources, and procedural understanding to guarantee that your claim has the best possible chance of success.

Collect Copies of Your Medical Records

The faster you deliver your medical records to your attorney, the faster your attorney will be able to start analyzing your case in-depth. This will enable them to solicit medical opinions from physicians, consisting of doctors, nurses, and other professionals that might serve as medical expert witnesses on your case. It is possible that after a comprehensive review of your medical records, an attorney will advise you not to file a lawsuit or suggest that your damages were not the result of a doctor's negligence. The sooner medical and legal professionals can examine your records, the sooner you will have the ability to decide if your case has a good chance of success.

Whether officially or informally, it is sometimes helpful to give notice of a potential suit to medical professionals and their insurance companies. In certain states, alerting healthcare specialists and their insurance companies is necessary to take the matter to court. Nevertheless, this type of notice will trigger insurance protection and internal review in all cases, so you may find that you can reach an agreeable settlement prior to filing a claim. The support of an experienced attorney is important as they will function as the liaison between you and the claims specialists who may or may not decide to take advantage of you in your case. Even though this is a mere negotiating tactic, it is no the less very undesirable. When it boils down to it, having an experienced attorney provide the appropriate parties with a notice of intent to file a suit is the best course of action.

As mentioned before, most states have a systemized pre-filing requirement for medical malpractice cases. Pre-suit requirements were made to make litigation more efficient, motivate settlement, and help weed out any insignificant claims. Most pre-suit guidelines require some sort of expert support, either in the form of an “affidavit of merit” that discusses the appropriate medical standard of care that was supposedly violated and any resulting injuries.

If you fail to follow these pre-suit requirements, your case can be dismissed altogether; however, you will normally get a chance to come into compliance before you lose your right to a legal solution for good.

The last and final step in starting a medical malpractice case is actually drafting and filing a complaint in civil court. This complaint is the official statement of the allegations against the defendant physician and/or medical facility. Once this complaint is filed, a lawsuit will begin. The filing of this lawsuit will start the clock on when the case might go to trial. Each state's pre-trial policies differ, but it usually takes between a year and a half to 3 years after a claim is filed for a medical malpractice case to go to trial.

The Offer of Proof or an Affidavit of Merit is Filed

In a lot of states, the victim's legal representative is required to send an "Offer of Proof or an Affidavit of Merit" when filing the lawsuit and prior to any pretrial investigation occurring. The function of the Offer of Proof or an Affidavit of Merit is to make sure that the medical malpractice lawsuit is legitimate. Depending upon the state you filed your case's laws, the attorney is required to submit a written opinion of negligence from a medical professional who has evaluated the victim's records or an affidavit from the attorney mentioning that the attorney talked through the case with a doctor who thinks the victim has a legitimate medical malpractice case. In some circumstances, states need a pre-lawsuit panel to consider the victim's allegations before submitting a claim.

When all pre-lawsuit policies are satisfied, litigation starts and the parties conduct "discovery," a procedure where each party examines the other's legal claims and defenses. They send questions and document requests to the other and take depositions of all proper parties and witnesses in the case, typically starting with the victim and defendant.

This process lasts a year or more, depending entirely on the court's deadlines, and typically requires each party to go back to court to get the judge's help. It is typical for one or both parties to be unhappy with the other party's response to the concerns or document requests and results in filing a motion to compel further responses. The judge will hear each side's argument and make a decision. This often happens multiple times during the lawsuit.

When the discovery period ends, the attorneys will start talking about the settlement. Sometimes attorneys can settle a case amongst themselves, but other times, it will go to mediation, where clients and attorneys go in front of an unbiased mediator to help settle the case.

Generally speaking, mediation will work, but when both sides are too far apart, the case will be scheduled for trial. It is crucial to keep in mind that just because a lawsuit is scheduled for trial does not necessarily mean the trial will happen on the specified date. Many trials are delayed and rescheduled due to the court’s schedule and delays in the case’s progress.