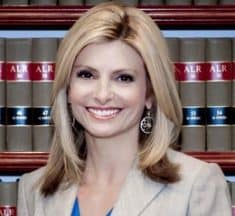 California attorney Lisa Bloom has made a career out of defending women who have been victimized by sexual assault and violence. But now she's defending Harvey Weinstein, the Hollywood producer accused of sexual misconduct. “He wanted to be respectful to women and he still wants to be respectful to women. And he’s asked me, of all people, to help guide him in that direction, to explain to him the laws of sexual harassment and why this is important,” Bloom told the Associated Press. The New York Times reports Weinstein has settled with at least eight women over alleged harassment. While Bloom has long represented women in high profile cases against celebrities like Bill Cosby and former Fox News host Bill O'Reilly, she said she confronted Weinstein about the accusations he faces in a "frank, blunt way." The AP reports Bloom's mother, National Trial Lawyers Executive Committee member Gloria Allred, says she wouldn't have taken on Weinstein as a client. Video of the Associated Press interview with Bloom is available here.