Wage and Hour Claims Increase to an All-Time High 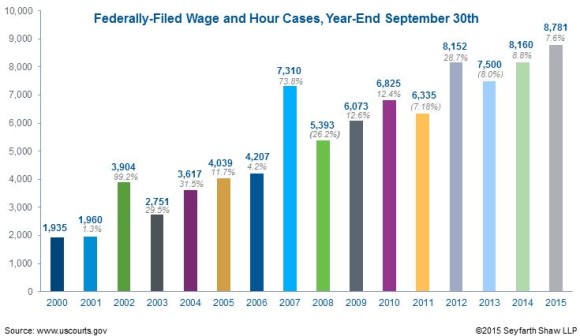 One of the primary reasons for the steady growth in wage and hour litigation filings is the overall increase in wage and hour awareness nationwide. The Obama Administration proposed new overtime rules this summer, with plans to amend the “white collar” exemption by Fall 2016.

There has also been an undeniable increase in independent contractor suits in recent years, with major businesses like FedEx and Uber making headlines. This summer, the Department of Labor issued guidance on independent contractor classification that interpreting the Fair Labor Standards Act broadly, covering most workers under the classification of “employees.” Additionally, the National Labor Relations Board issued a decision earlier this year that expanded joint employer status under the National Labor Relations Act.

Overall incidences of wage and hour federal court filings have exploded by 450% in the past fifteen years. According to Seyfarth Shaw LLP, this year’s filing number of 8,781 wage and hour cases totals more than any two pre-2005 years combined.

A Topic of Discussion and Litigation

Nationwide discussions have taken place regarding the potential of increasing federal minimum wage in the private sector, and many major employers have contemplated increasing minimum wage within their own companies to stay competitive. State and local authorities throughout the United States have proposed minimum wage increases, as well.

In addition to the changes in wage and hour laws leading to more claim filings of late, employees have become more aware of their ability to sue for perceived management missteps. Plaintiffs’ lawyers have been successful influencing large settlements and jury awards due to the increase in wage and hour case filings.

Now is the time for employers to take a close look within their businesses at the practices and policies in place. Employers – now more than ever – should speak with experienced employment law attorneys to ascertain whether they may be at risk for potential wage and hour issues such as pay practices (including overtime and minimum wage policies), timekeeping practices, independent contractor classifications, exempt status classifications, pay deductions, and recordkeeping.

The above-referenced statistical data is based on a fiscal year that ends September 30.