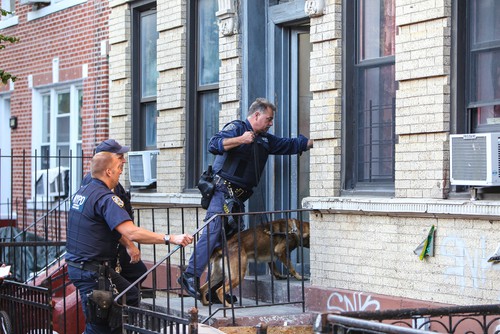 The Supreme Court of Wisconsin also upheld the conviction and ruled that the good faith exception to the exclusionary rule applied in the case.

The Supreme Court of Wisconsin upheld a Milwaukee drug dealer’s conviction stemming from the use of a warrantless dog sniff.

The court affirmed that the drug sniff violated the drug dealer’s Fourth Amendment right to be secure from unreasonable searches and seizures. However it also affirmed his drug possession conviction charges because the police officers obtained the warrant in good faith.

Gary M. Scull of Milwaukee was allegedly involved in the distribution of cocaine within the city in 2010, by conducting narcotics trafficking from his vehicle.  A confidential informant, who had previously been involved in cocaine trafficking, gave police information about Scull’s operation, address, vehicle and license plate number, according to the opinion.

The search of Scull’s home produced 3.85 grams of crack cocaine, 102.41 grams of marijuana, and paraphernalia such as digital scales and clear plastic baggies. Scull was charged with possession with intent to deliver cocaine and THC, and keeping a drug house. “Scull pled guilty to possession with intent to deliver more than 40 grams of cocaine and to keeping a drug house,” according to the opinion.

Scull argued that the dog sniff of his home was a warrantless search and any information obtained from that unlawful search must be suppressed.  At the time Scull filed the motion to suppress, Wisconsin courts and US courts did not consider dog sniffs to be searches, due to their less intrusive nature compared to other activities considered searches, according to the opinion.   Scull’s motion to suppress was denied.

The courts ruled that dog sniffs of vehicles and luggage in airports were not searches and did not implicate Fourth Amendment rights, according to the opinion.  There was not a holding case that addressed dog sniffs of a person’s residence.

After Scull was convicted, he appealed the decision on the basis that the dog sniff search was an illegal search and the evidence obtained from it should be excluded.  While his appeal was pending, the US Supreme Court ruled in Florida v. Jardines that a dog sniff of the exterior of a home owner’s door and porch that is used to investigate the contents inside the home constitutes a search under the Fourth Amendment.

The Wisconsin court appeals, following the Jardines decision, determined that Scull’s Fourth Amendment rights were violated when the police performed a dog sniff search of his home without a warrant.  “Nevertheless, the court affirmed Scull’s conviction because the police subsequently obtained a search warrant upon which they relied in good faith,” according to the court opinion.

The Supreme Court of Wisconsin also upheld the conviction and ruled that the good faith exception to the exclusionary rule, which excludes evidence that is illegally obtained, applied in Scull’s case.

The court determined that the police acted in good faith because they conducted a significant investigation before obtaining the warrant, which gave them enough probable cause to submit an affidavit to request a warrant.  The court further explained that the police officers would not have reasonably known the search was illegal considering the law on dog sniffs at the time of the search.