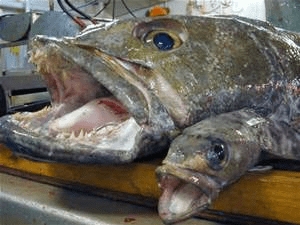 By J. Stephen Welch of McGowan, Hood & Felder, LLC in Anderson, SC. He is a member of The National Trial Lawyers top 100 trial lawyers.

The Patagonian toothfish is a species of cod icefish found in cold ocean waters at depths of over a mile deep. They weigh in as adults at over twenty pounds, and a few weighing in at over 100 pounds have been caught.

As you can see from the picture, it's not a particularly handsome fish. Would you keep it and clean it if you caught one, or even order it in a restaurant broiled or blackened?

Chances are that you have ordered and enjoyed this fish in some really nice restaurants or fish markets. However, you ordered it under the trade name that a smart fish wholesaler came up with who was catching lots of the ugly fish with the unappetizing name.  You ordered "Chilean sea bass."  Sounds much more appetizing than toothfish. However, there is no such creature as the Chilean sea bass.

The name Chilean sea bass was invented by a commercial fisherman and wholesaler named Lee Lantz in 1977. He was looking for a name that would make it attractive to the American market. He considered "Pacific sea bass" and "South American sea bass" before settling on Chilean sea bass. In 1994, the U.S. Food and Drug Administration accepted Chilean sea bass as an "alternative market name" for Patagonian toothfish, and in 2013 for Antarctic toothfish.

What can you learn from this fish story about trials? You can learn that the right words you use consistently during the trial make a difference. Do you refer to the impact where the defendant was speeding and ran into your client as an "accident?" If so, please stop. Accident carries a meaning more associated with unavoidable circumstances or lack or fault. Words like "impact," "wreck" or "rear-ender" carry fault meanings and are just as easy to use, but you must be consistent.

Do you tell the jury in opening that they will hear from your "expert witness?" Please stop. Expert witness can carry a "hired gun" connotation. I learned this from listening to numerous focus groups. If your witness is a physician, then refer to him or her as "treating physician" or just "Dr. Smith."  Is your witness an engineer? Then just say "John Doe, an engineer working for ABC Group." If your witness is an economist, then it is "Professor Smith" or "Dr. Smith" if he or she holds the PhD.

These word choices do matter, especially in opening statement. With little to no voir dire in South Carolina, opening statement is the first chance the jury really gets to form an opinion about you and your client, so your carefully worded narrative story (hopefully told from the defendant's perspective) needs careful planning as to word choice. Of course, you must still be authentic and sincere in every aspect of the trial, but correct word choice should not affect your demeanor.

In a recent series of focus groups done for a client, the facts were that the plaintiff was a former Wall Street money manager who had returned home to South Carolina and started a successful money management firm and trust company that was later bought by a large bank in an all stock merger. He was then under contract for several years with the bank with the title of "Vice President," but was instructed that he was not to offer investment advice, but was to primarily make sure the clients who had been with his trust company stayed with the big bank.

At the end of this contract period, he was in his 70s and wanted to retire. Since his primary asset was the bank stock, the bank financial advisors recommended a financial derivative investment (which also paid off several million dollars owed to a bank subsidiary).  He signed off on it with disastrous results.

In the first focus group, he was called "Vice President" and "money manager." The story was told to the focus group from his perspective, including his years on Wall Street and his trust company start up. The focus group was not sympathetic.

But he was not a money manager for the last five years of employment. He had no experience in derivatives, and was in his 70s and "retired" when the derivative was recommended to him. He was a "retiree" and a "customer" of the bank, who was owed the same fiduciary duty ("duty of trust") that any other bank customer was owed.

A consistent switch from "Vice President" to "customer" and from "employee" to "retiree" (and a story told in opening from the perspective of the bank employees) radically changed the focus group discussions. The subsequent trial resulted in the requested actual damages, plus a substantial award of punitive damages.

The values and language of the jurors

So how do you know what terms will be successful with the jury in your venue? One of the best ways is to test your case with a focus group early on, even before you start your discovery, to get a good handle on the values and language of the jurors in your county. The best results will come from professionally run focus groups, but even informal groups run by you or a member of your firm is usually better than no focus research at all.

In addition, there are numerous resources available to help you work on the best word choice for your case. Words that you can consistently use from your opening narrative story through closing. Books like The Reptile (and its follow up books and seminars like The Reptile in Focus Groups),  David Ball on Damages, 3rd Edition, and Opening Statement, Winning in the Beginning by Winning the Beginning by Gianni & Marcy, will help you get a handle on word choice, theme and narrative story telling.

The bottom line is that we now have research that proves choosing the correct words to properly convey your case theme and tell your well planned story narrative can mean the difference between a defense verdict and a substantial plaintiff's award.   Sure, having focus groups or mock trials done professionally can cost money, but the return on investment can be huge. Even if you have to associate a firm that can afford the expenses to properly prepare the case, it is usually worth it to get the best result for you and the client.

South Carolina injury lawyer James Stephen “Steve” Welch is a member of The National Trial Lawyers and a member of the legal team at McGowan, Hood & Felder, LLC in Anderson, SC. Steve is a certified family court mediator and a certified circuit court arbitrator. Steve has presented at various legal seminars, including a seminar on obtaining the best settlements for personal injury clients. Steve also does focus groups and jury research with Fuzzy Logic Consulting and blogs.