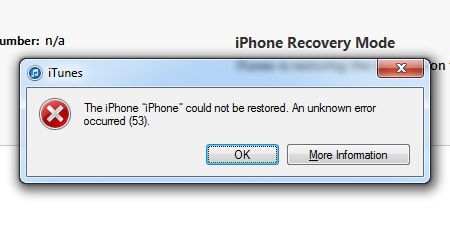 Faulty security software on iPhone 6 models led consumers to file a class action complaint against Apple, Inc. The issue left consumers without a phone or any data stored on the device.

Four named plaintiffs allege Apple was negligent in the way their concerns were handled after installing a software update on their new iPhone 6 in 2015.

The complaint names the issue “Error 53.” Error 53 is the message customers received after their phones crashed.

This message was connected to the Touch ID security sensor on iPhone 6, iPhone 6s, iPhone 6 Plus, and iPhone 6s Plus smartphones.

Apple sends customers unavoidable notifications of device software updates. Once consumers completed the update, and the device began to reload, the phones crashed and displayed the error 53 message.

No Warranty to the Rescue

Once the message appeared the device went into a Recovery Mode similar to a home computer; However, this did not work.  Each time the recovery was complete the message popped up. The complaint refers to this process as an “endless loop. . . that rendered the device useless or “bricked.“

Consumers contacted representatives to have the phones repaired to no avail. Consumers were told by Apple representatives that their disabled phones were not covered under warranty and was a user created problem for having hardware issues fixed at unauthorized repair services.

Some consumers explained that this issue was not with hardware, the issue was with the device's software codes. Others explained their phones had either not been repaired by a third party service or not repaired at all and the software disabled the phone anyway.

Although the number of users affected by this issue is unknown, the named plaintiffs are seeking class action status.

The plaintiffs are respresented by Darrell L. Cochran, Jason P. Amala, Loren A. Cochran, Kevin M. Hastings and Christopher E. Love of Pfau Cochran Vertetis Amala PLLC and Timothy A. Scott of the Law Offices of Timothy A. Scott APC.